Tesla’s Smart Summon feature is in its fourth iteration, and Early Access Program participants are testing out the most updated capabilities.

A deep blue metallic Model 3 featured in the most recent video published by YouTube channel ALL Electric is seen navigating from various parking spaces to selected point locations, specifically testing its ability to handle speed bumps en route to its programmed Summon location. The Tesla App is also displayed on the screen during the vehicle’s route, showing the real-time planned route of the software as it processes its environment. When unobstructed, Smart Summon handles the speed bumps very well. However, shadows seem to trigger extra visual processing, as seen in the demo, with the Model 3 opting to navigate itself into the lighted part of its path when encountering a partly-shadowed speed bump. Notably, the feature isn’t yet attempting to take account of parking lot markings when determining its route.

Smart Summon, previously ‘Enhanced Summon’, is a set of capabilities that allow drivers to operate their all-electric cars through the Tesla mobile app, specifically by having them autonomously travel to their location. Prior releases have built upon the basic feature in the original Summon that Tesla owners currently have access to, which allows the all-electric vehicles to autonomously drive in a straight line up to 150 feet. Where versions 1-3 of Smart Summon demonstrated slow, hesitant, and jerky movements, the demonstrated fourth version has significantly increased its maneuvering speed and handleds somewhat more complicated parking lot features. 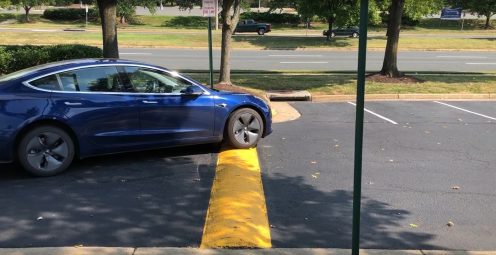 Smart Summon in a Tesla Model 3 decides to take the lighted part of the speed bump. | (Image: ALL Electric/YouTube) 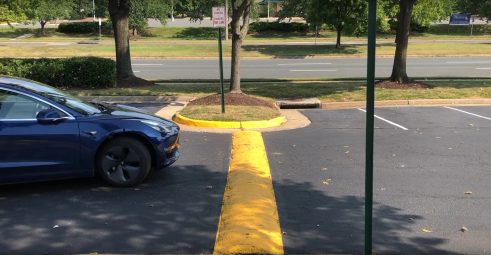 Smart Summon in a Tesla Model 3 hesitates at a shadow near a speed bump. | (Image: ALL Electric/YouTube)
(adsbygoogle = window.adsbygoogle || []).push({});

In ALL Electric’s prior video showing Tesla’s Smart Summon in its fourth iteration, the same all-electric vehicle seemed confident when reversing from parking spots, and there seemed to be an increase in the Model 3’s speed as it executed the Summon command over the prior versions. One interesting part of that test was the vehicle’s response to the transition from asphalt to brick in its driving path. This caused the feature to pause and assess the locations of the actual curbs vs. the perceived curbs based on color variations. CEO Elon Musk’s previous explanations of the feature’s fine-tuning challenges predicted this. “Yeah, we’ve been working on curbs a *lot*. Concrete seams too. So glamorous,” he tweeted at the end of June.

Smart Summon is expected to improve significantly as more versions are released. Musk previously stated that a Tesla “should be able to drive around a parking lot, find an empty spot, read signs to confirm it’s valid & park.” A wide release of the feature will be included in Tesla’s upcoming Version 10 firmware update, but self-parking looks to still be a ways off yet. Regardless, Smart Summon will undoubtedly provide plenty of advantages to owners, even if limited to personal valet service as an initial offering.