Mowing the lawn can quickly get in the way of summer fun, just like vacuuming and mopping interfere with just about anything else you might rather be doing. Never fear, iRobot, the company that brought you the Roomba robotic vacuum cleaner and Braava electronic mop, has been listening. Yesterday, the robotic chore solution company announced its launch of Terra, an intelligent lawn mower ready to do your outdoor bidding. According to iRobot’s press release, it will be on sale in Germany and the US, the latter being through a beta program only; however, no exact release date has been provided.

To accomplish its yard travels, iRobot’s Imprint Smart Mapping technology, which is arguably one of the features that made Roomba so popular, has been incorporated into Terra’s functionality. The new grass buster also has some other convenience features in common with its indoor cousins: It recharges on its own by returning to a docking base and can be controlled via an app on either a smartphone or digital assistant. For its more unique features, Terra’s designers relied on the current masters of lawn care for inspiration: humans.

Rather than follow any sort of random get-it-done movement path a Roomba might follow to clean a floor, Terra has a preprogrammed pattern modeled after the straight, back-and-forth lines typically used for mowing. If the battery is running low, the robot returns to its base to recharge, picking up where it left off until its task is complete. The grass cut length is also programmable for heights of about 1″ to about 2.5″, but it should be noted that Terra’s function focus being on maintenance over heavy cut jobs. 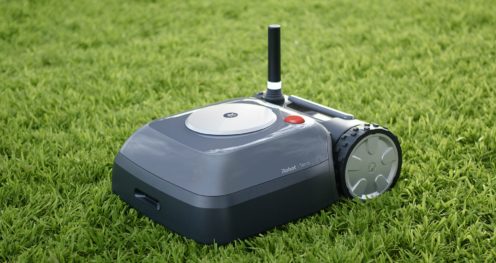 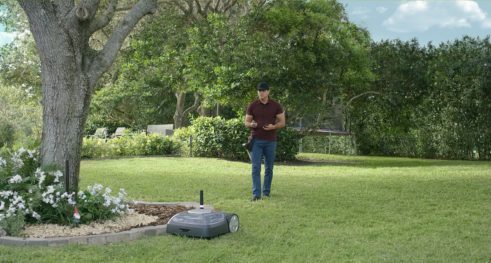 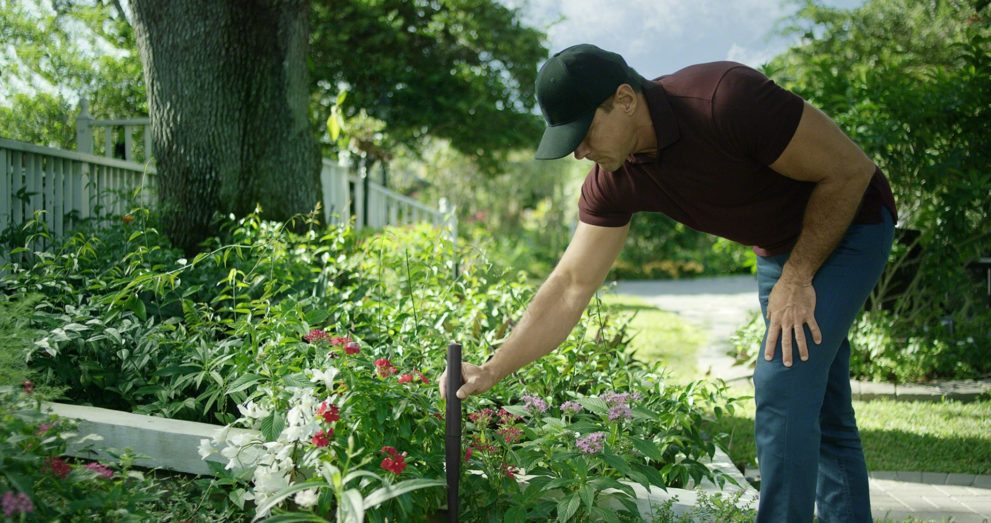 The weather isn’t lost on this outdoor helper, either. Terra has been designed with rugged features so that rainy conditions – and by extension, tough terrain – will not prevent it from doing its job. As for grass clippings? There aren’t any or at least any that need to be hauled off to the trash like classic lawn mowers. Sliced blades of grass are refined into tiny mulch bits that double as fertilizer.

Of course, iRobot isn’t the first company to venture into automated lawn maintenance solutions. Swedish manufacturer Husqvarna’s Automower robotically maintains lawns using frequent trips around a programmed area, naturally fertilizes soil with miniscule clippings, mows any time of day and in inclement weather, resists theft with a built-in alarm, and is controlled via app using smartphone or digital assistant. It uses an installed boundary line for yard area detection, however, making set-up more complicated than regular operation. German outdoor product manufacturer GARDENA and Wisconsin-based McCullough Motors have their own lawn robots as well – the SILENO and ROB R1000, respectively, with similar features as well as a required boundary line.

After a survey of the lawn robot market, iRobot took aim to eliminate costly and labor-intensive ground wiring which is required to operate other auto mowers. For Terra, the company developed a wireless communications system incorporating standalone beacons, enabling users to simply program their lawn’s boundary line after placing the beacons around their yard. The intelligent detection software developed by iRobot for its other robotic household helpers combined with a simpler installation process may just give the company an edge over its established competitors in the lawn bot arena.