In a recap of its Mars Express imaging satellite’s fifteen years orbiting the red planet, the European Space Agency, NASA’s European equivalent, released a compilation video showcasing the most stunning photos captured by the craft. The animation added to the imagery gives viewers the impression of flying over the planet’s surface, taking in the depth of colors as though they were physically there themselves. With Mars in sight for near-future human exploration, ESA’s showcase gives Earth dwellers a taste of what’s to come.

The images in the collection demonstrate the great variation in geography across the cold, regolith-infused planet. Included in the photo set are the Neukum Crater, named after Gerhard Neukum, a German physicist, planetary scientist, and one of the founders of the Mars Express mission who died in 2014. The craters on Mars are generally representative of the planet’s ancient surface preserved for billions of years.

Also included is a flyover of the Kasei Valles, an “outflow channel” similar to the giant water-carved features of Earth, likely formed from a combination of tectonics, lava flow, and catastrophic flooding (potentially from the Echus Chasma, also included in the photos). Of course, ice-filled craters and the north and south polar ice caps are also included in the set, features of the planet that will be quite helpful to humans looking at long-term stays. 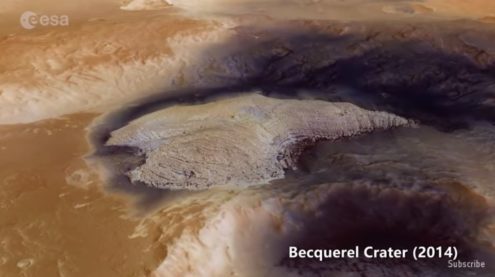 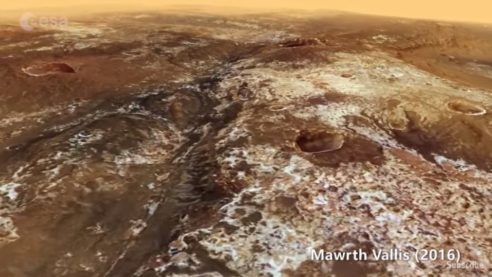 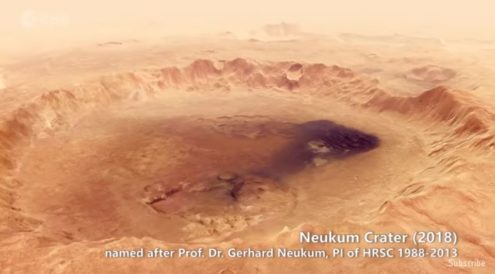 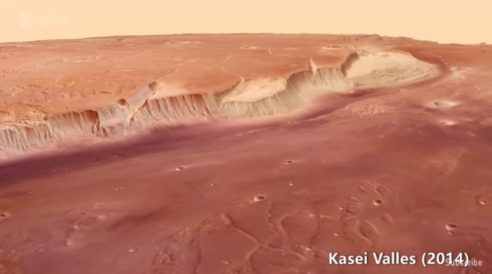 To create the incredible imagery, photos taken by the Mars Express satellite during multiple passes were compiled into a mosaic. The instrument used to capture visuals is the High Resolution Stereo Camera (HRSC), and it has a resolution of about 32 feet, with some regions measured at about 6 feet of resolution. The HRSC can also create 3D imagery, capturing the planet’s topography at a level of detail that enables geoscientific evaluation of surface processes in space and time. The video compilation was assembled and edited by members of Freie Universitat Berlin’s Planetary Sciences and Remote Sensing department.

Mars Express was launched on June 2, 2003 aboard a Soyuz/Fregat rocket and received its name from being the quickest built planetary mission craft of its type. Its planned mission is to image the entire surface of Mars at high resolution and produce maps of the planet’s mineral compositions and atmospheric activities. A lander named Beagle 2 had traveled along with it, but unfortunately it became inoperable after successfully landing on the surface. Its fate remained unknown until NASA’s Mars Reconnaissance Orbiter located and photographed it in 2015.

Around winter holiday time last year, Mars Express captured images which formed the amazing “winter wonderland” photo showcasing the Korolev crater in the northern lowlands of Mars. Since the satellite entered orbit around the planet on December 25, 2003, the capture was both relevant to the craft’s history and timely for the season. Yet another geographic phenomenon was on display with this surface feature – “cold trap” – where air moving across the crater cools, becoming heavy and getting “trapped” directly above the ice.

Watch the full video released by ESA below: